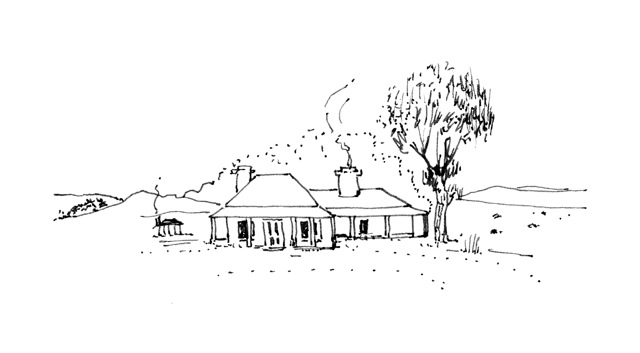 Sepr 20th 1846. Commenced raining in the evening
21st Rain all day
22 Rain until sun set
23rd Fine weather
24th Heavy Rain and Thunder which continued all Night the River rose rapidly this morning Jimies (?) Flock at the other side and cannot be got across
25th John returned from His up Country expedition

Octor. 2nd Leslie foaled a horse foal
6th Robert’s mare foaled a pretty foal
7th Wrote to the Cashier of the Bank of N. S. Wales respecting farm cheques that have been returned requesting Him to send a list of the Cheques banked since 24th of May last-
8th Ewes commenced Lambing
12th John set off for station for the purpose of buying some cattle
30th Commenced sheep shearing.

Novr. 4th William’s mare foaled a horse foal
6th My dray returned from the Bundarra about 8 oclock at Night
10th A very great number of Butterflies traveling to N.W. Mostly of a whitish color with dark extremities to their wings
12 Great numbers of Grasshoppers in the vineyard and Paddocks also on the Flat
14 Numbers of Catterpillars in the Vineyard of a yellowish brown color and quick in their motions
15th William went to Maitland
19th Catterpillars very destructive to the Fruit of every kind
21st and 22nd Rain
23rd very heavy Rain. My dray returned from Maitland on the 22nd being the 9th day from home. (So much for drunken bullock drivers)
24th Robert went to Maitland on the way to Sydney
26th Dray started from Station also a flock of sheep
29th William who accompanied the dray & sheep returned having lost his Horse, a deal of Rain fell within the last week

Decr. 3rd William again started for the station having found His renagade Horse. Robert returned from Sydney on 30th Novr Doctor Dimautin accompanied William as far as Mussell Brook. Andw. arrived from the Bundarra
16th Andw. again set off for the Station. Chester returned with Hoblers (do doubt some humane Person relieved the horse of them)
17th Another flight of Butterflies, the same kind as described on 10th Nov and proceding in the same direction a good deal of Thunder & Rain this day finished drawing drawing and stacking the bit of wheat on this Farm Mrs. S. Walter and Isabella Doyle went to Singleton
For the last fortnight the Manx Fly has been and still continues a Complete nuisance. People can scarely breath for them, and the Eyes of Man, and Horse, are swoln from their endeavour to enter them.
19th A good deal of Thunder & Rain the weather sultry & oppressive
20th Fine weather
21st still fine all the Family unwell and have been for some time.
22nd Edward Doyle called and delivered an insulting message from and at the request of Hoblers Lick Spittal C.M.D. Finished carting Wheat & Hay.
23rd Very sultry in forenoon Thunder, and very high Wind, with a little Rain Afternoon. Thomas McDougall called on His way to Mr. E. Doyle’s. Robert’s horse fell whilst galloping after Horses and bruised him a good deal.
24 Fine day moderately cool.
25th Xmas Day moderately cool Some distant Thunder in the evening.
26th Robert and Leslie went to Singleton to the Races, Edward Doyle called on His way to Singleton, the day Hot and Sultry.
27th My sister Fanny here, a good deal of Thunder and a little Rain afternoon
28th Day that my sister returned Emma very ill the rest of the family complaining. Walter set off for the Hawkesbury
29th Day Hot William returned from the Station bringing bringing 6 Fat bullocks and Four Milkers and their Calves-
30th Very Sultry Flies enough to choke a Person
31st Very Hot I went to Singleton to see Mr. Munro, who was not at Home, returned same day


Choose to read another page from the diary:


Or read another related page: