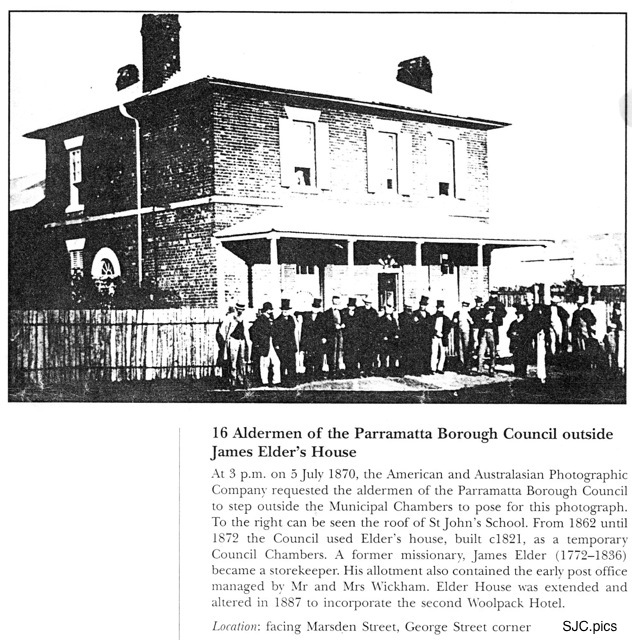 It looks as James Elder was one of the nine missionaries to Tahiti who arrived on 10 July 1801 on the Royal Admiral, which had apparently proceeded there from Port Jackson. He then went back to Port Jackson on board the Seringapatam, leaving Tahiti at the end of 1807 and arriving in Port Jackson in early 1808. His motive in returning was obviously to marry Mary Smith. He returned to Tahiti, because he is listed as one of the missionaries who left Matavai in November 1808 and crossed to Huahine in anticipation of an attack by rebels on King Pomare, who was their patron. Pomare was defeated and the settlement at Matavai was totally destroyed. One of the missionaries remained with the king and one stayed in Huahine, but all the others, including the Elders, left for Port Jackson on the Hibernia on 26 October 1809, arriving on 17 February 1810. They had apparently decided that for the time being missionary work in Tahiti was pointless. Most of the missionaries returned on the Endeavour in the winter of 1811, but not the Elders, who had clearly decided to open a grocer’s shop instead.

James Elder was a good friend of the Reverend Samuel Marsden (the flogging parson) as the two men were of the same ilk.

St John Cemetery records show that the Elder family definitely don’t recognise Edmund. The grave inscription gives James as the eldest son and Robert as the third son. There is a mystery.

Mr. Elder, who is a native of Scotland, was originally a Presbyterian Dissenter from the Scottish National Church, and was bred to the useful art of a stone mason. Disliking that laborious occupation, however, and evincing what was considered an evangelical and missionary spirit, he was sent as a missionary by the London Missionary Society to the Island of Otaheite, in the year 1802. Mr. E. resided in Otaheite for several years. In the year 1808, a rebellion broke out among the natives, and their king, the late Pomare II. was obliged to flee to Eimeo, a tributary island in the neighbourhood. The Missionaries having enjoyed Pomare’s protection were equally obnoxious to the rebels, and of consequence had to flee along with him. Their place of general rendezvous was the Island of Huaheine, where notwithstanding their being kindly received by the natives, they came to the resolution of abandoning the mission as an impracticable undertaking, and of retiring to New South Wales. To this determination they were influenced in great measure by the arguments of Mr. Elder, who represented on the one hand, that the cause was utterly hopeless, and on the other that they were abandoned by the Directors of their Society, who it must be confessed, had acted towards them with unpardonable and scandalous neglect, having sent them neither intelligence nor supplies for the space of six years. Two of the Missionaries, however, Messrs. Nott and Hayward protested against this resolution, and not only volunteered to remain at the islands, but expressed their determination to do so at all hazards. This Christian heroism was a tacit reproof to those who had determined to quit their post. It was felt as such by the latter, but being the majority, they determined to force the Decius and Curtius of their little band to compliance with their measures. With this view they resolved at the suggestion and advice of Mr. Elder, who was the chief advocate for the abandonment of the Mission and the chief speaker at the Meeting, that Messrs. Nott and Hayward (by remaining at their post of duty when the rest abandoned it) had cut themselves off from the mission altogether and were consequently unentitled to further support from the Society. Messrs. Nott and Hayward remained notwithstanding, and were the honored instruments, along with those of their brethren who returned to the islands, of planting the first Christian Church in Polynesia a few years thereafter. Mr. Elder and his associates retired to New South Wales, from whence the greater number soon returned to the islands. It was not thought advisable however that Mr. E. should return thither, in consequence of the spirit he had already manifested, and the Rev. Samuel Marsden, the Society’s agent in the Colony, was expressly requested by the other Missionaries to prevent his return. He therefore settled at Parramatta, where he has since resided as a baker and grocer, having completely divested himself of his Missionary character, and occupying himself in driving his own horse and cart twice a week to Sydney for flour and groceries. On his visit to the Colonial capital, he generally calls at the Commissary’s, with whom he ingratiated himself as a collector of intelligence in the village of Parramatta, during the Government of Sir Thomas Brisbane. On the author’s first arrival in the Colony, he was introduced by the Commissary to Mr. Elder, who requested him to preach once a week at his house at Parramatta. With this request the author readily complied, and he accordingly went once a week to Parramatta, and preached in Mr. E’s. house to all that came unto him for twenty-six different times, till Mr. E. growing tired of his visits actually procured their discontinuance. As Mr. E’s. house was not a suitable place for the residence of a Minister, the author on these occasions, after preaching at Parramatta in the evening, generally rode on in solitude and darkness to his brother’s cottage at Liverpool, about nine miles distant. And on discontinuing his clerical visits to Mr. Elder’s, with whom he had never had any difference, and towards whom he had uniformly acted with the utmost cordiality, he thanked him for his co-operation and offered to remunerate him for whatever trouble and expense he might have incurred, by allowing him the use of his room as a temporary place of worship.