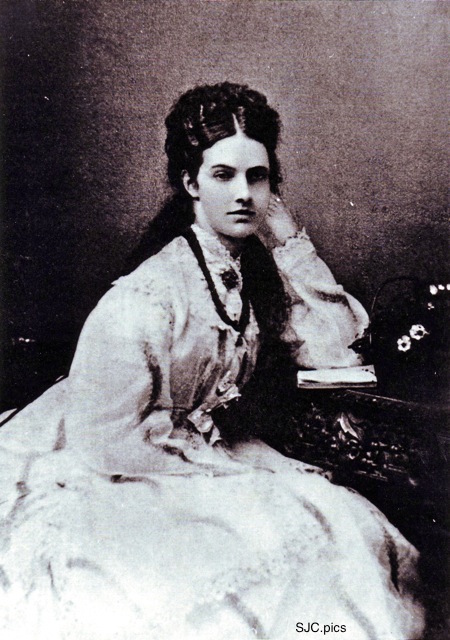 Susanna was the second child of Susanna and William Chapman and was born on 26 February 1842 at Old Farm, Campbelltown, the original small farm owned by her grandparents and inherited by William Chapman from his mother Elizabeth Ashcroft [1]. In 1842 Susanna was baptised at St. Peters, Campbelltown. Her parents were already planning to move to the Riverina and had leased land there where they needed to build an adequate house for a family. A third child William Robert was born in 1844. The family moved before the fourth child, Edward was born in 1845 [2]. Six more children were born at Butherwah: two girls and four boys. Elizabeth and Susanna were educated at home, the boys spent some part of their education at Kings School and the two younger sisters at Mrs. Almond’s Young Ladies College in Tumut. Susanna was a very pretty teenage girl with a mop of black curly hair and a dark complexion, she must have been very like her great grandmother Jane Langley when she caught the eye of Cyrus Edmund Smith and they were married on the 18 May 1859, when she was only 17. The marriage was at her parents’ home Urana Station with her sister Elizabeth was a witness.

For the first nine years of their marriage Cyrus managed Urana Station for Susanna’s father, William Chapman. During these years four children were born: Emma 18 May 1862, Florence 16 July 1864, in 1866 a little boy was still born. In 1866 Susanna’s sister Elizabeth married Cyrus’s brother Walter at Gravel Plains Station with Cyrus was a witness. The family had made their move to Tinaldra and a son Cyrus was born 13 July 1867. Cyrus was managing Gravels Plain Station for J. Mitchell.

Susanna’s husband Cyrus Edmund Smith had continuing interests in northern Victoria from the days when he and his five brothers were on the gold fields. While supplying cattle to the goldfields they had established a large wholesale slaughtering business on the Woolshed, Reid’s Creek, and at Beechworth. They also supplied cattle to the Wollomi and the Oven’s diggings. Both Cyrus and Walter were on the Ballarat Diggings in 1852.

The family grew up at Gravels Station, Tintaldra and four more children were born in these years: Ethel Blanche in 5 July 1869, Annie Beatrice 10 March 1873, May Constance 15 December 1875. Susanna and Cyrus lived an active life at Tintaldra for as well as cattle they had sheep and carted wool to the main centres for themselves and their neighbours. There was very busy social life with dances, picnics and races which were all well attended. [4]

For Douglas Urquhart’s birth 12 March 1880 Susanna went home to her parent’s grazing property Lumley Park at Bungonia while eleven year old Ethel was left with her grandparents, and Ethel’s grandfather made Old Farm over to Ethel. Two more babies are born to Susanna this time in Wodonga: Eliza Constance Irene 5 March 1882 and Alfred Gordon 6 February 1884.

In the latter years Cyrus and Susanna lived in both Wodonga and Albury. Susanna’s eldest daughter Emma was married to Alfred Snell Chauncy at their home in Wodonga. When Susanna’s husband Cyrus died in 1900 they were living at Smollett Street, Albury. This is the house many of the family remember them at. They also had a house Birnam Wood at Marrickville where Susanna lived for the last five years of her life. After Susanna died of cancer 18 March 1906 her body was taken back to Albury to be buried with that of Cyrus.

[1] William and his sister Elizabeth were the surviving children of Elizabeth Ashcroft’s first marriage to Robert Chapman who had been killed in a horse accident when they were very young and the property had been a grant to Elizabeth Tebbutt when she married Robert Chapman a convict. Elizabeth was adopted by her Tebbutt grandparents John and Ann.
[2] Edward was born at Butherwah in the Riverina on 26 July 1845.
[3] Charlotte Styles attended Mrs. Almond’s Young Ladies College with Henrietta & Eliza Chapman. Charlotte Stiles was the step daughter of Elizabeth Chapman whose brother William Chapman Senior now became her father-in-law.
[4] ‘Tintaldra 1873-1878 Diary of Charles Trench Armstrong’ transcribed by Clare, Coralie and Roland Peddie.