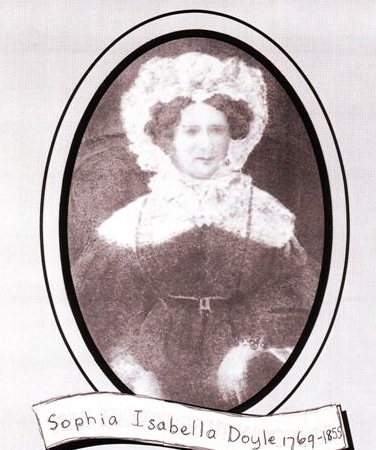 Sophia as painted by Andrew.

Sophia, your first Irish Grandma, was born in 1769 and is believed to be the daughter of John and Mary Norris. Mary’s maiden name was Jouanier [1] and she was believed to be of French Huguenot descent. Sophia was protestant and Andrew brought up Roman Catholic and appears to have followed Sophia’s religious beliefs from the time of his marriage. In Australia they followed the rites of the Church of England.

Sometime in 1792-3 Sophia married Andrew Doyle. A son, Cyrus Matthew Doyle, was born to them at Palmerston on the 27th November 1793 and a daughter Louisa was born in 1795. Andrew was in gaol for six month’s shortly after Louisa’s birth, but was out before Edmund’s birth in 1799. There was probably another child born during these years as papers refer to them having four children before they left Ireland. Presumably this child died in infancy.

Sophia’s husband was arrested and gaoled again in May 1799 and the 7th July 1799. Apparently they had moved to 2 Park Street, Dublin, which was raided and searched by the authorities who took goods and money. To put it mildly, Sophia was not pleased and objected. Sophia herself was then gaoled for some time with strict instructions not to allow her to communicate with Andrew. Eventually on 8th December 1801 Andrew was convicted for possessing the means to forge pound notes. The Irish Government paper for this had been found in Sophia and Andrew’s toilet, ‘the necessary’ Andrew called it. Andrew had learnt of this information when he came home one night drunk. Sophia seems to be well aware of what Andy (as Sophia called him) was up to and always supported him though she had little time for the shortcomings of other people. Andrew’s brother James was also convicted of being involved with Andrew.

Andrew spent nearly a year in gaol before being transported, and Sophia who could read and write (accomplishments not all women had been taught at this period of history) was busy collecting letters from influential friends and relatives [2] and arranging for a comfortable journey. Sophia paid for a cabin for herself and the children and which Andrew was to be allowed to share with her. Sophia’s sister-in-law Margaret Doyle and niece Bertha were supposed to accompany them but they missed the sailing.

The Rolla sailed on the 4th November 1802 and arrived in Rio de Janeiro on the 15th January 1803 where the ship stayed for a month with Sophia responsible for Andrew. They had what is described as the happiest of holidays, and made friends with the Spanish President of Sevile Snr. Dn. Pedro Preusy whom they were sad to part from. Sophia is sometimes referred to as the first Irish lady in the colony and she certainly was able to entertain and be entertained in turn. Sophia was clever and resourceful, and when the ship arrived in Port Jackson on the 12th May 1803, bought a house at the Rocks and applied for, and received 70 acres at Toongabbie, which later they described as Seven Hills. The remains of her property today is ‘Sophia Isabella Reserve’, Baulkham Hills which adjoins Torry Burn Reserve which is the old Smith farm. Sophia was allowed to have Andrew to help her, and was also given two convicts as labourers to work the farm and, because Andrew had with the help of one of the letters of introduction [3] they had brought, got a job as an artist with Governor King. They were on government stores.

Sophia was heavily pregnant when the Battle of Vinegar Hill occurred 4th March 1804 and though they only had a gun stolen from their property and were known to be Irish loyalists it must have been a very frightening time, as they knew some of the participants from their journey to Australia on the Rolla. Eight weeks later a daughter Emma Maria Doyle was born on the 18th April 1804, some people say at Windsor where her birth was registered, also Toongabbie and the Rocks. Emma was baptised at St. Philips in October 1804. Personally I think she was born at the farm as Andrew in one of his many letters refers to her birth at Toongabbie and it is known they were living at Toongabbie before Sophia was given the grant which came to be known as Doyle’s Farm. Also in this year Andrew bought a fifty pound part-interest in a twenty-ton boat to carry wheat from the Hawkesbury to Sydney. Andrew was getting money from somewhere. He is considered to be a favourite of Governor King’s and working regularly for him as an artist. Sophia Isabella Doyle was born 25th September 1806 at the farm and Andrew and the children were not listed on stores but Sophia was.

The Doyles early Baulkham Hills neighbours are of interest: the Smiths, the McDougalls, the Biggers, the Howes and the Fitzs. Eventually the Doyles moved to a larger property about 1814 and built a grander new home ‘Ulitedinburra Lodge’ at Portland where they lived until their deaths. Peter Doyle wrote in his book that he believed Ulitedinburra Lodge to be built on land Sophia bought from William Evans in 1810. Sophia’s children married into these neighbouring families — children mostly of early free settlers. Two sons were born at the new property: John Frederick Doyle on the 18th January 1809 and James George Doyle on 10th November 1811. Edmund married Frances Smith from Torry Burn on 5th July 1819 at St. Matthew’s, Windsor and four months later Emma married her brother John Smith on 8th November 1819. Cyrus and Louisa were already married and John and James didn’t marry until 1829 and 1832.

Sophia and Andrew seem to have been very security conscious about their home, and did not encourage people to approach it on land, having it surrounded by a five rail fence and guarded by seven savage dogs. People approached it by boat from the river calling for one of the five servants who had their cottage by the landing to secure the vicious dogs [4]

Both Sophia and Andrew were busy in this time selling and obtaining more property, often in the names of their children, and Sophia was also sponsoring other children in the rush to obtain land [5]. In fact, in time Andrew complained that he was never allowed to have a grant for himself. Andrew generally had problems with the authorities with his uncertain temper and drinking. On 7th May 1821 Andrew ended up in confinement at Windsor Gaol on bread and water, after he told Rev. Samuel Marsden at the funeral service for Thomas Arndell in the middle of the sermon he was talking rubbish. Once more Sophia came to Andrew’s rescue taking a letter from Andrew to Father Therry [6].

Andrew died of apoplexy on 2nd September 1841. Sophia lived another fourteen years and was the grand dame of her family. One son-in-law crossed her path, John Smith. John wasn’t happy with his brother-in-law Andrew Louis McDougal who had married Sophia Doyle. John had gone guarantor with the Bank of New South Wales for Andrew and Andrew McDougal didn’t keep up the repayments and the bank was threatening to foreclose on John’s property Tory Burn at Bundarra, New England, which John had used for collateral so John was forced to sell the property and borrowed money from his son-in-law Charles Dight and paid back the debt in 1850 [7]. John did not suffer in silence and complained verbally and in letters to anyone who would listen and Sophia decided it was the drink that was John’s problem and also took to abusing John verbally and in letter writing. I don’t know who won the battle of the letters, John died of a stroke in 1854, and Sophia died on 2nd May 1855. The Sydney Morning Herald of 8th May 1855 contained the following obituary for Sophia:

Died at Ulitedinburra Lodge, Sackville Reach, on 2nd May 1855, Sophia Isabella Doyle, née Norris, relict of the late Andrew Doyle, in her 86th year. This venerable lady will long be remembered with respect on the Hawkesbury where she resided for half a century.
Andrew was buried on the property and Sophia was buried with him. Sophia had 73 grandchildren. In 1910 the family sold the property and Sophia and Andrew’s remains were removed to St. Matthew’s Churchyard Windsor, where they now lie on the western side of the churchyard.

[1] Baptismal record of a Mary Jouamier. This baptism took place in the French Non-conforming church in Peter Street, Dublin on the afternoon of Sunday the 13th September 1719. She had been born on the 2nd September that year to Etienne Jouamier and Elizabeth Bazire.’ From The Hawkesbury Doyles by A.P.Doyle. I have referred widely to Peter’s work for this short biography, also to Baulkham Hills —;A District Second to None by Pam Trimmer.
[2] Sophia was reputed to be related to Lord Castlereagh and Andrew took letters of introduction to Governor King.
[3] Nath. Cravan Esq. Sheriffs Peers & Apothecary (Dublin Directory 1804) see page 16 The Hawkesbury Doyles
[4] 1826 Andrew gave evidence at the murder trial of Kitty Collins and described the house security.
[5] 27th May 1810 Conveyance of right title claim and interest of William Evans to Mrs. I Doyle in and to 30 acres of land.
[6] Andrew ended his letter with this little ditty:


Such Sir is the misfortune of placing in pulpits Such men as are not able to Elucidate any doubtful Hypotheses nor expound to the Vulgar ear the nature and mysteries of religion.

By such mistakes is nature oft time foiled
By such contraries I’d never teach her
Because an useful blacksmith may be spoiled
By making him an execrable preacher.


Andrew was having a dig at Samuel Marsden being the son of a blacksmith. There is no record if Father Therry was able to help Andrew.
[7] See John Smith’s letters page 27-28 and his diary.