Sarah was born in the Midland city of Leeds and worked as a shoe binder, finishing off leather shoes.[1]. 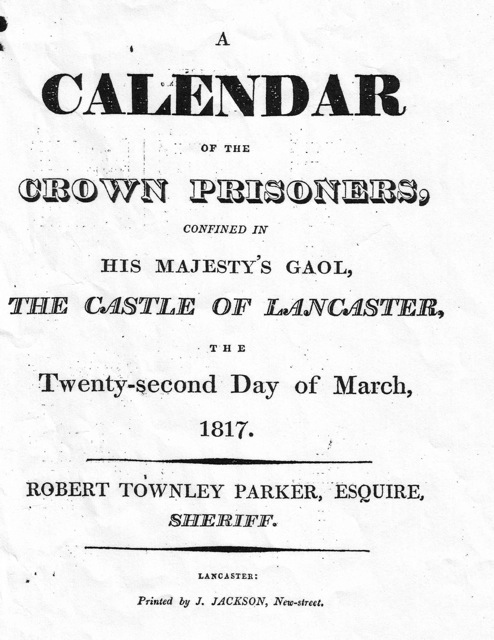 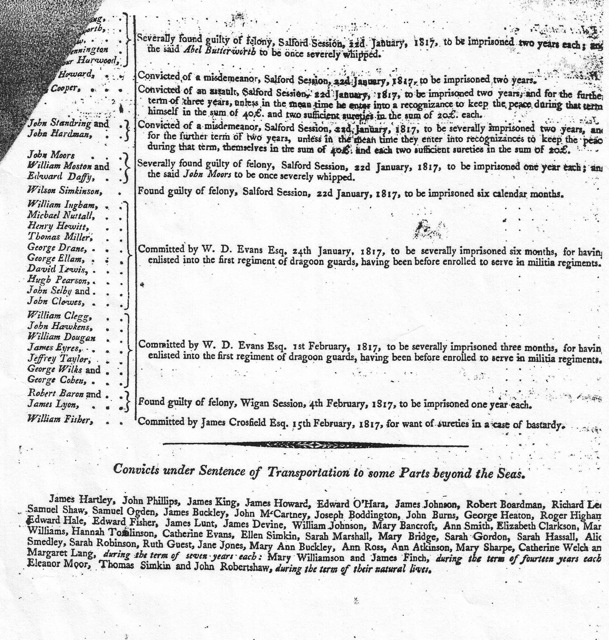 Sarah was arrested in Manchester on 27th May 1816 and charged with having in her possession three forged Bank of England notes, and knowing them to be forged. Sarah was held at Lancaster Castle Gaol and tried there on the 31st August 1816 [2] and sentenced to fourteen years transportation. While being held in Lancaster Castle in 1817 Sarah gave birth to a son Benjamin whom she brought to Australia with her. All these events left Sarah a very unhappy lady, and she objected strongly to those in authority and did not hesitate to make her feelings known. The surgeon wrote in his log Sarah was ‘mutinous, seditious and bad-tempered’ [3]. This did nothing for Sarah’s reputation when she arrived at Port Jackson on board the Friendship on 14th January 1818. Sarah was sent to the Female Factory at Parramatta. 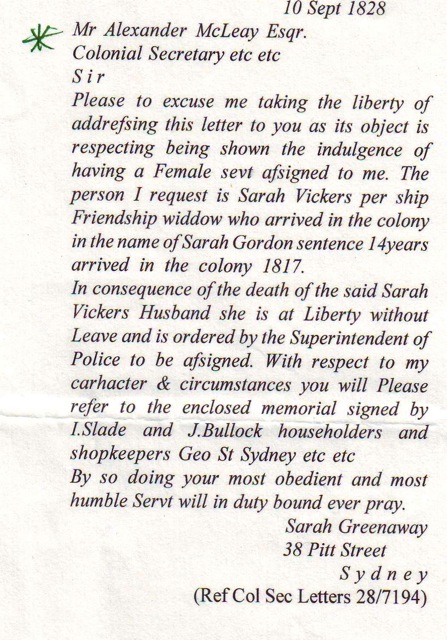 Within a short time Sarah came to the employ of the fifty-seven-year-old Richard Vickers, a convict who had served his time and had become an oil merchant in Pitt Street Sydney. Their first son, William Vickers, was born in November 1819 and died a week later. A second son John Vickers was born in December 1821 [4], baptised on 13th January 1822 at St. Philip’s, and died on 5th February [5]. Like his brother, he was buried in St. Philips churchyard. In 1822 Sarah was back in the Female Factory and confined for disobedience [6]. Richard, who by this time was sixty-three, obtained permission from the Reverend William Cowper to marry Sarah on 17th October 1823. They were married on the 4th November 1823 at St Philips, their witnesses being A. T. Morgan and Thomas Taber (parish clerk) [7]. Their son James Vickers was born 17th April 1824 and was baptised on 6th June 1824 at St. James. A daughter Susannah was born 19th June 1826 and baptised at St James on 4th July 1826 [8]. James died at the age of three years at their home at 4 Upper Pitt Street Sydney on 20th July 1827, and was buried in St James churchyard. Sarah had not rid herself of her problems with the Female Factory, and found herself confined on the 14th April 1828 for disobedience [9]. Richard Vickers was by this time sixty-seven years old and died on 2nd July 1828, leaving his business to his wife and daughter.

Sarah was an astute business woman, helped her friends out with property, was responsible for property left to the Buckton children, and made friends amongst her peers, one of whom was the widow of the convict Joseph Greenaway. Mary applied for her friend Sarah and children to be granted to her as a servant, and they were living with the Widow Greenaway when the 1828 census was conducted [10].

As I write this I am horrified at the authorities’ lack of sympathy and care for Sarah. Every time she had a child or her baby died or her husband died, they would lock her up in the Female Factory again, and quite often punish her with solitary confinement. History tells us the British government was tightening up on the treatment of convicts and John Bigge was observing and writing his report during these years. The Bigge report was to lead to the last brutal settlement of Norfolk Island and Port Arthur. Sarah was to go forward and marry again and have to more children, but it would appear to be in spite of authorities rather than with their help for a redeemed life. On New Year’s Day 1830 Sarah Ann Pickering was born daughter of the convict George Pickering who was assigned to Mr. Samuel Ratcliff of Parramatta. In 1830 Sarah is back in the Female Factory [11] and in trouble for giving the matron ‘presents’. It took a further two years for Sarah and George to get permission to marry. This may have been complicated by the fact George had a wife in England, and it is recorded she died about this time [12]. 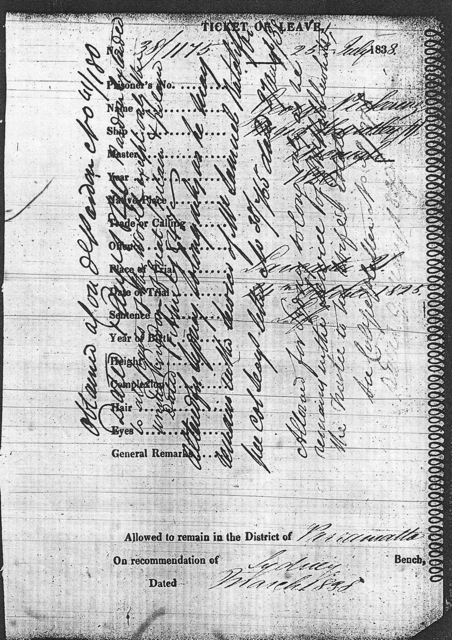 Sarah and George were married on 12th March 1832 in Scots Presbyterian Church, Sydney and on the 25th April 1832 a son George Thomas Pickering was born. Sarah Ann and George Thomas were baptised on 20th May 1832 in the Presbyterian Church, known as Scots Church. In 1833 Sarah applied for a grant of land, which was in Dixon Street, was mortgaged soon after but later on became her son George’s property. Sarah and the four children Benjamin, Susannah, Sarah Ann and George Thomas were all living at 6 Upper Pitt Street, and Sarah’s husband George was bound to Mr. Samuel Ratcliff of Parramatta and had obtained a ticket of leave in 1838, Sarah’s health was some concern and she made her will 20th August 1838, and died on the 13th November 1838 aged 41 years and was buried at the Sydney Burial Ground Devonshire Street in the Presbyterian section. When Central Station was built her remains were transferred to the Pioneer Cemetery, Bunnerong. Samuel Ratcliff was away from the colony and George was caught out of Parramatta and bound over to the Parramatta Quarter Sessions [13] for visiting his children on the death of their mother. Sarah had left a will leaving the household furniture to her husband George Pickering, her clothes and wearing apparel to her daughters Susannah Vickers and Sarah Ann Pickering her property which consisted of houses in George and Pitt Street and other real estate to be shared by her four surviving children when they came of age. Mr Hebblewhite who was one of the trustees had George Pickering transferred to his service on the argument George would be so busy with so many responsibilities he would not be likely to abscond. We are fortunate that when the property came to be divided amongst the four children, there was a successful search for papers and documents [14] and the family have kept these historic papers, so there is a good collection of original documents in good order. Though Sarah never survived to see her grandchildren and her daughter Susannah from her first marriage died in childbirth. A child survived and her daughter Sarah Pickering eventually had 4 sons and we know of 10 grandchildren. 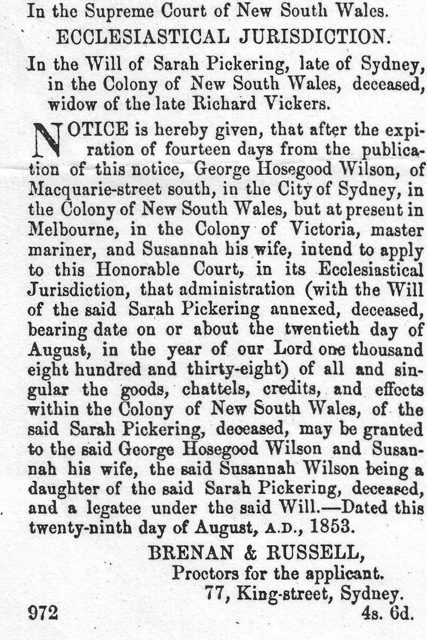 Sarah’s will has been transcribed here.