Mary Harley is our only Scots Grandma. Mary was the eldest child of Robert and Mary Harley née Downie and she had five brothers and one sister. Mary was born at Carriden in the Fife and by the time she married her father was working as the excise officer at Torryburn. The banns for Mary’s marriage were called at St Giles Gray Friars Edinburgh in the week preceding her marriage to John Smith at St. Cuthbert’s Midlothian, Edinburgh, Scotland on the 27th July 1787 when she was twenty one. John was the third child of Robert and Frances Smith née Smiton of Torryburn, Fife. Two of his siblings died as infants. There are family legends with the Smith family, that they were strong loyalists and fought for Bonny Prince Charlie that their original surname wasn’t Smith and they changed it to escape the wrath of the English. You get clues like they called their farm Torry Burn after the village where John was born. Another family name they used for their properties was Birnam Wood which is in the Highlands of Scotland. The Scotch had a very difficult time under English domination in the 1700s: if you spoke the language, wore the kilt or played the bagpipes — imprisonment for 5 years, and transportation for 7 years for the second offence. Some of the Smith family were supposed to know but adopted the motto Leave the dead to sleep.

Mary’s eldest child Robert was born on the 19th April 1788 and baptised on 26th April 1788; Mary was born on 31st December 1790 and baptised on 1st January 1791 [1]; John arrived on the 27th March 1793 and he was baptised on the 30th March 1793. Mary and John senior must have been living quite close to the church to be having these very new babies baptised so young — Mary wasn’t a day old and John’s three days old. James the last of the Edinburgh babies was born on 6th September 1795 and baptised on the 19th September 1795. While Mary was busy with her young family John and two other young friends had heard of an opportunity to go to the new colony at Port Jackson for work and the opportunity to get land to farm. So they applied for a contract to build a corn mill at Parramatta. 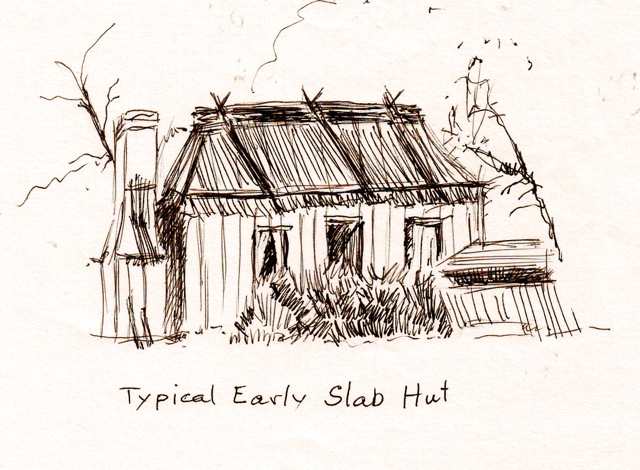 The three young families successfully had their contracts accepted to work in the colony of Port Jackson and sailed with their young families on the convict transport the Barlow that became a drawn out journey because of the Napoleonic War. The Barlow was requested for support during the voyage and there was a threatened mutiny by the convicts. When the ship finally arrived at Port Jackson the official that arranged the contract had returned to England and the government gave them help and supplies and land leases in the Hills District to set up farming. The life was hard and people had to be self-sufficient, their homes were built from materials available on their land — local timber, stringy bark for roofing, plaster composed of soil mixed with cow-dung and chopped grass. This plaster was smoothed over the walls and when dry, white washed with lime, or apple tree ash mixed with sour milk. For safety’s sake they all lived fairly close together. Mary and John had only lived in Scotland until the voyage and Mary appears to have had a fairly broad Scotch accent consequently people didn’t always know what she was saying, so she would have relied on her family and friends for company. In December 1799 Peter was born and he died the following April. Peter was buried on the farm as far as we can work out, but when St. John’s Cemetery Parramatta was founded in 1812 the family purchased a vault and Peter’s remains were moved to it. A daughter Frances arrived in 1802 — a time that Rowland Hassall described as the country side being in great distress. Wheat was very dear and farmers were starving for bread. Reverend Samuel Marsden told Rowland Hassall the Smiths and the McDougalls existed on barley cakes [2].

The soldiers and the Rum Rebellion didn’t make it easy for the Scottish farmers. They found Governor Bligh more sympathetic to their plight and were very upset when Governor Bligh was overthrown. Two more sons William 2nd February 1805 and Andrew 1806 were born in these difficult years.

The army imprisoned Mary’s husband John for a month for standing up for Governor Bligh as were his friends Andrew McDougall and George Suttor in 1809. Mary had to run the farm with the help of the boys in these troublesome times. The children were all educated and learnt to read and write and debate as we know from their letters and diaries that have survived and are in the New South Wales library.

The eldest girl Mary married James Elder, a South Seas Missionary, in 1808 and spent some time with him in the mid-Pacific on a mission station in this time a ships captain fell madly in love with the beautiful young woman and committed suicide when his love was not returned — a most upsetting state of affairs. The mission was not a success and James returned to Parramatta to make a life as a trader closer to his wife’s family. James went on to become a Shire Councillor of Parramatta Council and for a while his house was a temporary Council Chambers [3].

Mary Smith Senior lived until 26th August 1835 and is buried in the family vault at St John’s Cemetery, but we have no surviving records or drawings of her or her activities in those twenty-five years. Mary had 50 grandchildren. 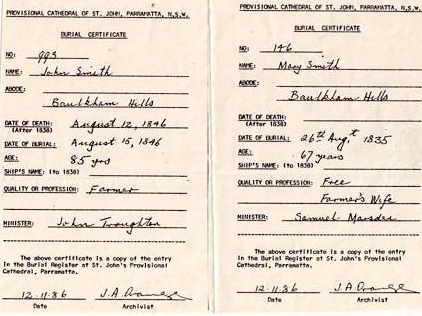 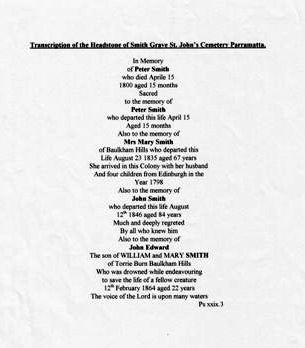 [1]New Year is a bigger festival than Christmas in Scotland so this would have been very special to the young family.

[3]Elder House was extended and altered in 1887 and became the second Woolpack Hotel, which still exists today.

Sieve together the flour, salt, baking powder and sugar. Add oatmeal.
Rub in the margarine until the mixture resembles breadcrumbs.
Mix into a dough with the water.
Turn on to a board sprinkled with oatmeal and roll unto a thickness of approximately a ¼ inch.
Cut into rounds and bake for 15 minutes at 325 °.

Cream butter, sugars, egg and vanilla until light and fluffy. Beat in water. Sift dry ingredients and stir in with nuts and raisins and oats.
Drop heaped teaspoons of mixture about 2cm apart, onto greases baking trays. Press walnut or cherry into top of each biscuit.
Bake in preheated hot oven (190 °C / 375 °F) 12-15 mins or until lightly brown. Cool on racks — makes about 60. Margaret Fulton’s recipe.
These two recipes by kind gift of Jean Armstrong, Broken Head.

Melt butter (important that it is butter for flavour) and golden syrup in a large saucepan. Add bicarbonate of soda mixed with boiling water.
Combine all dry ingredients then add to melted mixture. Mix to a moist but firm consistency. Drop spoonful of the mixture on to a scone tray lined with baking paper. Bake unto golden brown.
Cool for a few minutes before placing on to a wire-cooling tray.


For Memories of Toongabbie Creek produced by Parramatta City Council I wrote In 1798 John Smith came to the Colony on board the Barwell. John was a carpenter and his wife Mary and children Mary, Robert, John and James accompanied him. John Smith had a farm Torry Burn at Baulkham Hills. Mary married James Elder who with his three brothers-in-law leased land at Toongabbie from 1810 to 1820 to run cattle. John Smith Jnr even applied unsuccessfully to get permission to cultivate the land and build a house on it, Governor Macquarie recalled the leases. John moved to Lower Portland and secondly to Birnam Wood near Singleton. James Smith managed the Government Farm at Toongabbie. Robert went on to work as an overseer for the Marsdens before going to Bathurst and James Elder stayed in Parramatta. References the Colonial Papers and family papers.

I have in my possession photocopies of John Smith Junior’s letters and diary from 1846 to 1854. The three families that came on the Barwell — Smiths, McDougalls and Bowmans not only lived for the first generation in the Hills District but for at least another two generations inter married and moved outward together to the Hunter and the New England District and west to Bathurst and outlying districts. They were close, certainly given to some squabbling amongst themselves, John Smith Junior lost his New England property Torryburn at Bundarra through going guarantor for his brother-in-law Andrew Louis McDougall (the details are in the surviving letters of John Smith Junior) and later some of the third generation moved to the Victorian gold fields and the Riverina. Caroline Chisholm was a friend and stayed at Birnam Wood as did countless other people travelling up the back road to the Hunter and further on.