Most likely Mary was the second daughter of Mary née Bowlden and Edward Geer [1] of Henfield, Essex. The records show Edward and Mary had three children: Ann, Mary and Thomas. All were baptised in the local church, St. Peters. Mary was baptised on 18th April 1790. Henfield is a straggly village with a gorse-clad common, with peaceful river and water meadow scenery. In the 19th century 6,600 varieties of plants were recorded in the village and numerous citings of golden orioles.

If this is Mary’s family there is no record of the intervening years until she was arrested for theft in the village of Etchingham. It was quite common for girls of thirteen to have a job as a skivvie, which often took them some distance from their homes.

It is on record that the Hawkhurst area was having trouble with gangs of street kids in the late 1700’s, and if these young people were without work or got into any trouble they were dealt with harshly. Mary was 15 years old when she was charged with house breaking, reports are various one is she was on her own the other that she was part of a gang of 15. From the amount stolen I think it would need a gang to carry the goods away. Mary was tried 28th July 1804 at Horsham [2], Sussex and pleaded not guilty, but the court found her guilty and sentenced her to be hanged. This was later commuted to life imprisonment and transportation.

Mary sailed to Port Jackson on the William Pitt, the same ship as Samuel Bate, though it is unlikely they knew each other — their descendants married one another in 1893.

Mary was 17 years old when she was assigned to Benjamin Haywood a soldier settler as a servant. His partner was having a baby and he had a lease on the Hawkesbury, probably in the same area as William Davis was working for Roger Twyfield. Hepizabah was born 17th March 1807 at Parramatta, and James 17th March 1809 at Parramatta [3]. Mary who had received a ticket of leave when she went to work for Benjamin Haywood received another ticket of leave on 11th February 1811, and Eliza was born on 16th August 1811. All three children were baptised by the Rev. Marsden at the original St. John’s, Parramatta on Christmas Day, 1812. A second son John was born at Parramatta 16th April 1814, and in October that year the family was reported as living off stores — similar to social security today. The 19th March 1815 was a big day for the family as Mary and William were married [4] and John was baptised. Mary had a third son, Samuel on the 1st June 1816 at Parramatta. He was baptised on 29th July 1816 at St. Philips, Sydney.

Mary’s fourth son, and our line of descent, Ebenezer was born on 7th August 1818 in Parramatta and baptised at St. John’s on the 17th January 1819.

The family struggled to meet commitments. Mary was not well, William had a withered hand, and their assigned convict servant John Lucas had poor health. They moved to Windsor for a time, but by the time Robert Mary’s seventh child was born on 17th December 1822 they were back in Parramatta. Robert was baptised at St. Philips on 12th January 1823. Sixteen-year-old Hepizabah married William Syrett on the 1st July 1823 and died on the 14th August, probably in child birth, there is some evidence a male child may have survived. Hepizabah death was a devastating event for Mary. William referred to Mary being much afflicted in a letter in December [5].

By 1825 the family had moved to Kent Street, Sydney. On the 25th October Mary’s eighth, and last, child Charles was born in Sydney. Sixteen-year-old Eliza married a widower, George Onslow at St. Philip’s on the 6th February, 1826. One of the witnesses was her brother-in-law William Syrett. Eliza applied for a land grant on 13th February and received 52 acres at Holdsworthy. Charles was baptised on 26th February 1826. That was a busy month.

Samuel and Ebenezer attended the Sydney Public School run by Mr. Tim Cape between 1828 and 1829 and soon afterwards both started a five-year plastering apprenticeship with William Lycett.

Mary, just 40 years of age, became a grandmother with the birth of Eliza’s first child Jane Onslow registered at Liverpool.

On 24th April 1831 John McKaeg conducted a Baptist-type service in the Long Room of the Rose and Crown Inn in Castlereagh Street. Mary Davis is the only one who attended whose name is remembered, and by the time it was decided to found the new Baptist Church in Bathurst Street in December 1836, Mary was No.5 on the first Baptist roll. Mary attended meetings as well as services, but it was recognised she was too deaf to take part in any discussion, and had a reputation for falling asleep in the sermon. Oh! My darling ancestor.

James had married Elizabeth Fowles on 31st May 1831 at St. Philips with William and Elizabeth Syrett as witnesses. William Syrett had remarried in 1826. In the next five years five more grandchildren arrived.

On 23rd January 1838 Samuel and Ebenezer were working on a job in the Bathurst district when they were caught selling spirits without a licence. Mary and William fought the case on their sons’ behalf getting character witnesses from the Baptist minister John Saunders, their old school teacher Mr. Tim Cape and employer William Lycett. Nevertheless they were convicted and served two months in Parramatta Gaol.

The family was rapidly expanding with more marriages taking place and grandchildren being born. The 30th November 1842 was to bring another tragedy. Seventeen old Charles was following on his brothers’ tradition and serving his apprenticeship as a plasterer but while working on the construction of the Sydney Synagogue Charles fell from the scaffolding. He died the next day from his injuries. Two years later Eliza’s husband George Onslow died.

Jane Onslow, the eldest grandchild, married John Rowley at St. Luke’s Liverpool on 14th July 1846 and, on the 29th April 1847, John Clarkson Rowley, Mary’s first great grandchild was born. Mary had at least forty grandchildren and I suspect hundreds of great-grandchildren. My grandmother Nellie Davis always said there’s one behind every bush in New South Wales — a long way from the teenager from Etchingham.

Mary died at Kent Street and was buried by the Baptist Pastor John Ham at Devonshire Street Cemetery. Headstones of Hepizabah and Charles were nearby. Mary’s read Sacred to the memory of Mary Davis beloved wife of William Davis departed this life March 27 1851 aged 67 years and is still in Botany Cemetery. Mary had 44 grandchildren, some of whom died during her lifetime. 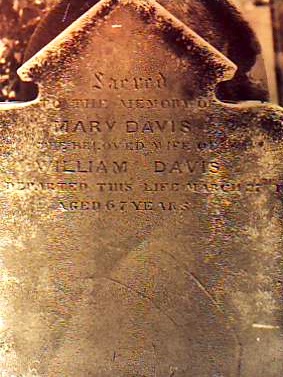 
[1] IGI No further research has been done to confirm this information.
[2] Mary’s trial papers and others are in my collection.
[3]There has been speculation whether Hepizabah and James are twins, and whether both or perhaps Hepizabah are William’s children, Letters written by William Davis in the 1820’s always claimed them as his children, and they always used the surname Davis, I accept them as his children.
[4] Banns were called on a previous Sunday for this wedding.
[5] Letter to Major Goulburn re servant problems. CS 79 A 49 pc. Be aware that professional letter writers wrote these letters William Davis ’wrote’ and in all probability William couldn’t read and write himself.