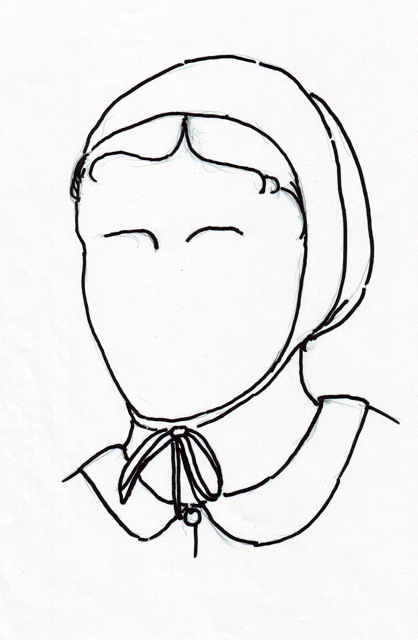 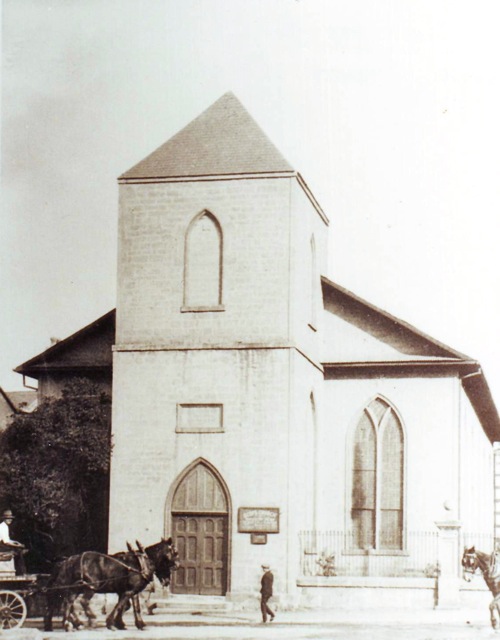 
Louisa and Ebenezer Davis were married on 20th March 1846 in Scots Church Sydney. The names given are Louisa Vallce Brairley spinster aged 24 years, and Ebenezer Davis bachelor. Neither of them had any member of their family recorded as witnesses. Ebenezer was the licensee for the Globe Inn Bathurst in 1846. The following year on the 31st January a son Charles Henry Davis was born to them in Bathurst, and the baby was baptised on 4th April 1847 in the Wesleyan Church Bathurst. Ebenezer’s occupation is given as publican, and we know he had changed the name of the inn to the Cricketers Arms. By 1848 Ebenezer had moved to Icely Inn, Carcoar. On 21st December 1848 a daughter Elizabeth Mary Davis was born and baptised that year. We have no more records of Louisa Davis that can be verified. [1] 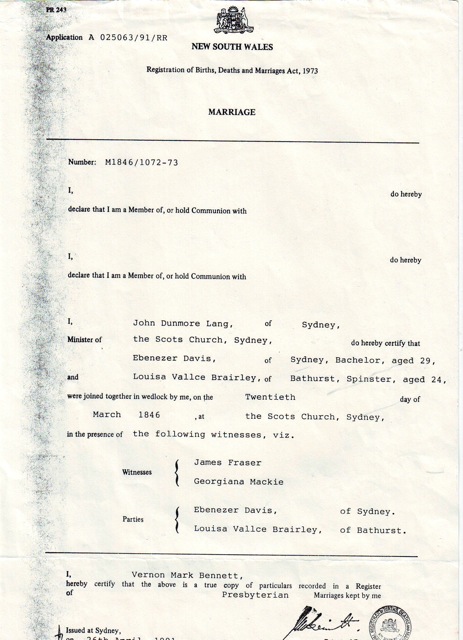 However there is an oral history which I haven’t been able to prove or disprove that says Louisa was the sister of William and John Whittaker of King’s Plains. William and John Whittaker are believed to have come to Sydney in about 1838. Their father is said to have died on the voyage, and their mother soon after. There is no record of a sister Louisa or a Louisa Brairley on the ship’s register. In 1839, eighteen year old Louisa and 21 year old Ebenezer started cohabiting. The question is "were they bringing up 10 year old William Whittaker and 8 year old John Whittaker?" These two boys certainly had intertwined lives with the young Davis couple. William Whittaker went on to become Ebenezer’s partner in building ventures and John Whittaker’s daughter Florence Jane Whittaker was William Walter Davis’s third wife. Another of John Whittaker’s daughters Louisa May Whittaker married William Walter’s son William Whittaker Davis, though that marriage was dissolved within a few years. Louisa and John also shared the second name of Vallce. Such an unusual second name suggests a family connection. I am sure that last paragraph will have challenged you to see if you can solve the problem. The Whittaker family is believed to have migrated from Manchester. Though looking at the name Brairley there was a large group of Brairley children in and out of the Orphan School at Parramatta in the 1820’s and there was a daughter Louisa and the mother a convict couldn’t cope when she was widowed and put the children in the Orphan School. Interestingly her second marriage was to a Mr. Whittaker, but all attempts to research this family have proved futile.

DNA now confirms William & John Whittacker are Louise’s half brothers. Louise’s mother was Mary Brierley who married Thomas Whittaker and they are believed to have died soon after arriving in Australia. None of her descendants seem to have any concrete information on who they are or when they came. Mary is believed to have been Irish. My DNA connects to descendants of all three.

[1] These dates and information can be confirmed from certificates records and newspaper cuttings collected by myself, Jan Stinson, Elsa Jones and Marilyn Black.