I only know the facts recorded in statistics for Laura, so some one else will need to write this story.

Laura was baptised at St John’s, Mudgee by Archdeacon J Gunther on 14 May 1854

Laura married Henry in 1873 [2]. He was an up and coming businessman in Mudgee.

Laura was buried on 31 May 1921 in the Church of England Cemetery at Mudgee. 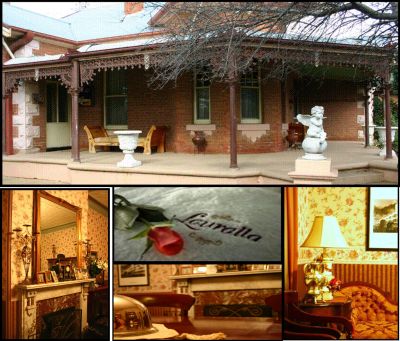 The death occurred on Tuesday morning last of Mrs. Laura Wells, relict of the late Mr. H. E. A. Wells of Mudgee. The deceased, who was one of the oldest Mudgee natives, was born in Mudgee 67 years ago. She was the daughter of Mr. and Mrs. Evan Richards, who were old and respected residents of the town, Mr. Richards being the first school teacher in Mudgee. The deceased lady had been ailing for some time, and her death was not entirely unexpected. She was very widely and popularly known throughout the district, and had numerous friends. She is survived by the following children — Mrs. J. S. Hart (Fiji), Percy George Wells (Mudgee), Mrs. Harold Hardwick (Mudgee), Mrs. T. H. Nicolle (Cremorne), Mrs. Francis (Fiji), and Vincent Wells (District Court, Sydney). She is also survived by the following brothers and sisters — Mrs. Moore (Sydney), Mr. E. Richards (Rylstone), Mrs. F. Leslie Mudgee, Messrs. David and Evan Richards.