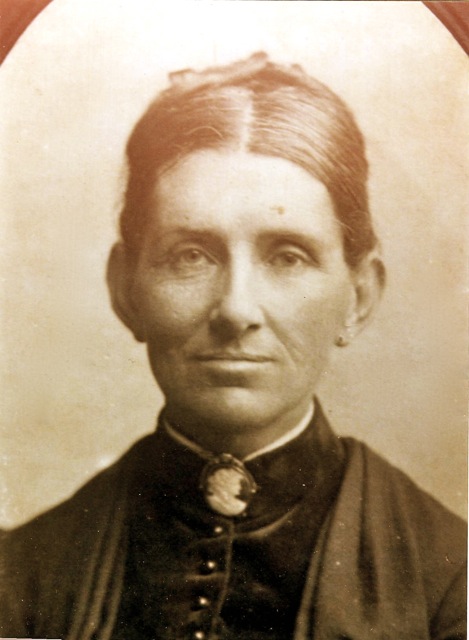 Isabella was my mother’s beloved Grandma and her photo hung in my mother’s bedroom. Now it hangs in my little study. I also have a post card size photo of the original photo. In the enlargement her son Walter, a professional photographer in Auckland, has carefully brushed the lines out, wanting to remember his mother in an earlier and happier time.

Isabella was born in the Hawkesbury district the fifth child of Sam and Nancy [1]. It is not quite sure whether they were still at Wiseman’s Ferry or had moved to Windsor. We do know Isabella’s three younger siblings were born in Windsor. Though little is known of the four surviving sisters’ [2] childhood, tight bonds were made between them, and as adults they stayed in constant contact, as did the next generation. Though Sam and Nancy were born in Northern Ireland, they considered themselves Scots, and always told their children they were from Scotland [3].

The 1840’s were a difficult time in New South Wales which was affected by the global recession. The gold rush that came in 1851 gave hope and employment and saved a struggling colony. Though Windsor was on the doorstep of the road across the Blue Mountains, the older Armours showed little interest in leaving their established home at Macgrath’s Hill. Sam was working as a carrier for Mr. Tebbutt the store keeper across the road. The eldest girl Mary Jane met and married a Windsor boy named Will Magrath and settled in Windsor. Isabella’s eldest brother Sam Junior was the first to try his luck on the goldfield going to Sofala which was described as a wild and swinging town. Sam met a young English girl, Fanny Taylor, and married her in Sofala in 1859. This established home allowed his sisters Lizzie (Elizabeth) and Isabella to visit Sofala. Mary Magrath’s first husband Will died in 1859 and Mary moved to Bathurst where she met Robert Drew, a young man from Kent trying his luck in Australia, and they married in Bathurst in 1862. Lizzie also met and married David Poyitt, a young Scot trying his luck. They married in Bathurst 1862. Isabella had met the local boot maker at Sofala Ebenezer Davis and they married at Sofala at the home of the Methodist Parson the Rev Mr. Caldwell 29 April 1865. Sarah the youngest sister eventually came to the goldfields and met James Lewis Attuel, a young miner from Bath. They married in 1868.

Isabella and Ebenezer had family in Bathurst so they moved back to town and lived in Morrissett Street. Their first child Agnes Maud was born at the home of Aunt Mary and Robert Drew, Durham Street, Bathurst in 1866. Isabella’s eldest son Ebenezer Bathurst was born at Vittoria in 1867 a year later. The family appears at this time to be constantly on the move, and when their second daughter Louisa Rosalind was born in 1869 they were living at George Street Bathurst.

Ebenezer’s sister Laura was married to George Asmus and they had two young sons. In 1866 George Asmus who had the lease of the coaching house called the Half Way House [4] at Kings Plains died of TB. Laura, his wife, stayed on at the Half Way House housekeeping. Unfortunately her five year old son George Frederick Asmus fell in the well and was drowned and she moved to Forbes. About this time Isabella and Ebenezer moved to the Half Way House, Carcoar Road, Kings Plains. Ebenezer’s father had built the Half Way House in the 1840’s in partnership with William Whittaker and it was regularly offered for lease. A second son Walter George was born at the Half Way House in 1871 and the family settled in to living there. Isabella’s father-in-law and daughter Elizabeth were also living at the Half Way House. When Elizabeth married John Paul, another English miner who came from Devon, they were all witnesses to the wedding. Harold Ernest was born in 1873 and this time Isabella is the informant, and states she is born in Windsor. This is the first document where we see this statement. 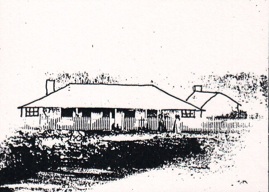 Isabella had her sixth child Arthur Wentworth on her 32nd birthday 12 August 1875 and again we have Ebenezer as the informant. To confuse us all he says Arthur was born at FitzGerald Mount. There is a ruin of an old coaching house at FitzGerald Mount, but no record of the Davis family having ever being there.[5] The next four children are all born at the Half Way House at Kings Plains. Miriam May in 1877, Orlando Bede in 1879, Oswald Armour in 1881 and Percy Bates in 1882. The two youngest do not survive infancy and are buried under a large pine tree on the property. Agnes used to shoo the children away from playing near the graves.

The eldest daughter Agnes took on more responsibility with helping bring up the large family. It’s Agnes who is the informant for the death of Percy Bates, and the oral story in the family is that Agnes was responsible for banking the gold dust the miners paid with, and she used to carry it on the coach plaited in her hair. There were expectations of the other children as their father had taken a lease of some nearby land which was required to be occupied, and after the evening meal the eldest son Ebenezer would take a hurricane lamp and his little brother Arthur for company and go and sleep on the property. Their shelter was old water tank tipped on its side lined with blankets and pillows. It sounds mighty cold at Kings Plains.

Isabella was the central person in the family, and as the older children married and moved away they regularly came home to visit, and the girls to have babies. Miriam gave birth to her eldest daughter Isabella Florence in 1899 one hot November day, and my grandmother, a daughter-in-law, was sent on horseback to Blayney for the doctor. Louisa had married a ship builder Arthur Eli Forrester and moved to New Zealand and named her eldest daughter Mabel Isabella. Isabella scolded about it being a second name, so another daughter was produced — Isabel Armour. My grandmother being a mere daughter-in-law got away with calling one of her daughters Elsie Isabel. Arthur’s eldest daughter was Nancy Isabel. Every generation since has an Isabel.

Louisa’s brothers Walter and Harold and their cousin Frederick Paul followed her to New Zealand, but eventually Harold and Frederick returned to Australia. Sydney was drawing the remaining sons. Agnes was working as a seamstress in Bathurst. The large family had taken it’s toll of Isabella’s health and her husband Ebenezer didn’t cope well with it. The family on a visit home found her in a very neglected state, so Arthur took her back to Sydney to live with him and his family. As she grew steadily worse she went to live with her niece Belle Busby at “Waitara”, 39 Glover Street, Mosman and died of cancer on 16 September 1912. Her youngest daughter Miriam died in Blayney just a few months before her. Isabella is buried in the Church of England section of Rookwood Cemetery [6].

Ebenezer lived another five years at the Half Way House, and died in Bathurst Hospital. The funeral cortege came back by train from Bathurst and Ebenezer was buried in the Church of England section, Blayney. The Half Way House at Kings Plains was still there in the 1940s but fell into a decayed state, and was used by passing people as a doss place, so the Blayney Council ordered it to be demolished.

[1] Agnes Armour was known as Nancy and is recorded in some documents as Nancy. In some documents Isabella is recorded as being born in England, on her son Harold Ernest Davis registration for which she was the informant Isabella says she was born in Windsor 1873.
[2] Eliza Jane Armour died at sea and was buried at sea on the voyage to Australia on the Mandarin.
[3] The family lore was the original family came from Fife.
[4] The coaching inn was approximately half way between Bathurst and Carcoar.
[5] The Bathurst Historical Society thought it was unlikely Ebenezer was the leasee of the FitzGerald Mount Inn & explained it away with saying Vittoria, Kings Plains & FitzGerald Mount were names all used for the same area namely in their believeth Kings Plains — personally I am not so sure.
[6] I am told by my Stinson cousins, who were told by their mother Isabella Florence Stinson née Finlay, that Ebenezer her husband never visited Isabella in her illness nor came to her funeral, and that my grandmother Nellie Davis was so angry she burnt every photo she could find of Ebenezer Davis. Consequently we have no photo of him.