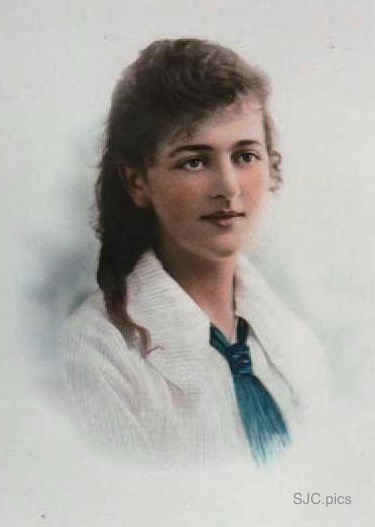 When my grandmother died in January 1966 at the age of ninety three, I wouldn’t have believed our Mother would have lived to such a great age. Our mother, whose brothers and sister died before she was three years old on the harsh gold and silver mining fields of central western NSW, was brought up the frail only child of Ebb and Nell Davis. Mum was born in Bathurst on 10th October 1901. She lived first at Dark Corner then Kings Plains and then at Blayney.

When she was 12 with failing eyesight and her father in ill-health from dusted lungs and heavy metal poisoning, they moved to Fairfield, and Mum went to school at Smithfield. When it came time to go to high school, grandfather said no — he didn’t want Mum travelling to school by train every day. After they sold the chicken farm they went to live at Wahroonga not far from the Seven Day Adventist Hospital.

Mum by 1917 was considered old enough to travel on the trains, and worked in one of the first shops in Lane Cove for a family friend, Mrs. Roe, who had a cafe and also sold real estate. While working there Mum saved the life of the child of Mrs Roe. When she found the little one choking to death she swung her upside and gave her a swift slap on the back. Mum’s parents wouldn’t hear of a monetary reward and Mum was instead given a new white dress for her impending confirmation.

My grandparents bought the third shop in Lane Cove shopping centre soon after, and ran it as a tearoom cum ham-and-beef shop. My grandfather died in 1921 and Mum and Grandma ran the shop for a living as there was no widow’s pension in those days. Mum’s health and eyesight had improved and she was a fashionable Gibson girl in 1917. In the twenties she was a flapper with short skirts, short hair and pull-on hats, and this attracted my father’s attention. Fred was helping to build some brick storage tanks for the Paper Mill that used to be on the Lane Cove River. He and his friend Dick Elvie were English immigrants resident in Victoria, and they boarded with my grandmother while working in Sydney. Fred and Elsie continued to correspond after he returned to Victoria. Mum went to work at Anthony Hordens in the city and flatted at North Sydney when Grandma was remarried to Owen Conduit.

At thirty Mum went to Victoria for a holiday and married my father at Holy Trinity Church, Maryborough. They honeymooned at Ballarat. They lived at Bendigo for a short while and then bought an apple orchard at Arthur’s Creek. It was the depression, the years were hard, and they went broke. During this time myself, my brother Bruce and sister Joan were born. I remember those days as happy, idyllic and full of fun. We had one of the only radios in the district, and Mum and Dad and the neighbours played ping-pong at night and listened to very crackly cricket and Mum made bacon and egg pies for supper. They also owned an old A-model Ford they’d rescued out of someone’s chook yard. They went to church at the local Union Church and played tennis at the courts opposite it.

This was the great capacity of our mother: even if it was tough you recited poetry and got on with the job. She was encouraged as a child to learn poetry, she recited poetry to her children growing up, and she still recited poetry in her old age. They taught us to love the bush and the bush animals and plants.

When my mother’s stepfather Owen Conduit died in 1936, it was decided my parents would move back to live with my grandmother at Lane Cove. Soon after their return we were baptised in the old St Andrew’s, which Mum had seen built in her earlier years by Mr. Kendine. My brother Allan was born in 1939 just after black Friday when we had sat on our front veranda and watched a bush fire trying to burn down Lane Cove shopping Centre. Beverly was born during the war. Dad was away both in Australia and the Pacific in the army, so Mum and Grandma brought us up.

This continued after the war for a while as Dad was away working for Paynter and Dixon in Melbourne and Brisbane. In 1955 while on holidays they were involved in a car accident and Mum was shockingly injured with multiple fractures and she spent months in bed. She had to learn to walk again and to do household chores, which she did with great tenacity. During these years they were very involved with St Andrew’s. Dad was on the vestry and Mum was a parish visitor, and they were both involved in the building of the new St Andrew’s and Rectory. Both worked on the cleaning roster.

After my father died in 1974 Mum became somewhat of a recluse because of her declining health; she gave up travelling completely and gradually went out less and less. She kept her interests in art and Australian history, read the Herald and the National Geographic and dabbled fairly successfully in the stock exchange [1], she took a keen interest in her 5 children and their families, 21 grandchildren and 28 great grandchildren and, I think, was a bit bewildered by her 2 great-great-grandchildren. She saved all sorts of bits of memorabilia about her descendants. She loved her family to visit and my English cousin Cathie said to me on her visit to Australia it’s always a party when I go to Aunt Elsie’s. We certainly all remember endless cups of tea. Mum’s solution to any problem was, Let’s make a cup of tea.

Mum was a strong-willed woman and we were always reminded we were children and not to step over boundaries, which didn’t always make the last nine years easy, with her failing health and loss of eyesight. She said to me 18 months ago, things haven’t worked out like I thought they would, but it’s just up to me to lie here and let the sea wash over me and make the best of it [2]. She was kind and thoughtful, and I have heard her ask the staff at Lynvale when they brought her a meal, if they had something to eat also. The last words my family can remember her saying were God bless you All.

[1] There are interests I haven’t talked about such as her love of the garden at 53 — home to so many of us.

[2] Mum had never realised her last illness would be 5 years long, requiring 24 hour nursing and always hoped she would get better and go home.