While Mrs. Daisy Birkenhead, wife of Mr. R. C. Birkenhead, a well-known Orange dentist, was attending to a fire under a copper, flames leaped out and set her clothes alight. She was burned from neck to feet. Mr. Birkenhead, alarmed by the screams of his wife, was instantly on the scene, and a doctor was summoned and the sufferer removed to a private hospital. She died this morning.

Deceased was a native of Orange, and a member of the esteemed Lane family, her late father, Mr. John Tom Lane being the local police magistrate for a number of years.

The Cairns Post adds that a girdle at her waist prevented her ridding herself of her upper clothing.

The BDM evidence is that Carl Birkenhead married Mary A Lane. It seems that Richard called her Daisy and that others called her Annie. From this we deduce that her middle name was Annie. The SMH marriage notice calls her Daisy Mary, eldest daughter of the late John Tom Lane, Orange. 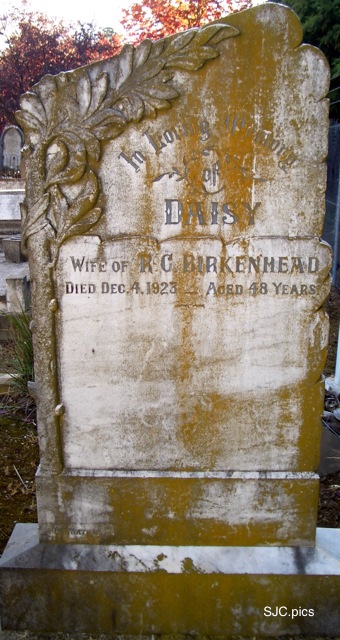